I'm in LOVE with this recipe. I don't use cloves or bay leaves, I use only 1 teaspoon cumin, I use two tablespoons of oregano, I don't use cayenne or any peppers besides the black pepper and about 5 chipotles in adobo sauce (and it's spicy enough that way) but it still tastes amazing. These are just little changes I've made throughout the years. I honestly think it's better than store boughs. I've made this at least two dozen times and it never fails. I put it in the slow cooker for usually eight hours on low after about an hour on high in the beginning. Or you can do 5-6 hours in high. Sometimes I don't even brown the meat and honestly it turns out almost as good as so if you're in a hurry don't feel bad about not browning the meet. We eat these like a quesadilla, so I take a tortilla and then I put some sauce (ranch or copycat Taco Bell quesadilla sauce) and then I put shredded Gouda or mixed white cheeses and the Barbacoa and I put another tortilla on top and I just fry that in a tiny bit of oil in my cast-iron pan on both sides until it's melted and it is one of the best things I've ever eaten. Top with guacamole and dip it in ranch and you'll definitely make whoever is lucky enough to eat this very happy! I have a pot cooking right now. I usually double the recipe, it heats up great so leftovers never go uneaten, no matter how much I make! 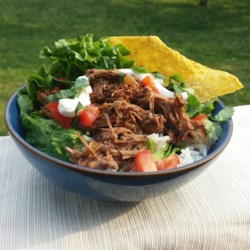