All the ingredients sounded like this was going to be great, but the end result was unappealing. It calls for way too much milk. I used 1/4 cup, which is plenty. Any more and the bread would have been falling apart and you'd still have leftover mixture. I microwaved the cream cheese and jam, for only 20 sec, and it bubbled, became runny, and I had little chunks of cream cheese in the jam. Then when I poured the jam mixture on the French Toast for the last minute, it started to spread everywhere in the pan. I think this would have turned out better if I cooked the French Toast slices first, then spread one side with jam, the other side with cream cheese, and put the two slices together. The recipe is a nice concept. I'd like to try a method that works better for me. 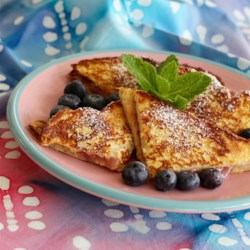