I tried this recipe for the first time yesterday, made for a gathering for the "girls" Christmas party. Seventeen accomplished cooks and bakers raved over these and requested the recipe! I made a double batch (four dozen), and made a couple changes. One inadvertent one was that I used cornstarch instead of baking powder by accident (the red Rumford cans look the same!). It didn't seem to hurt the finished product one bit, though. I also doubled the amount of the caramel for each recipe at the suggestion of others here, and was glad I did. It was just the right amount and wouldn't have been enough if I hadn't doubled it. Also, I generously slathered the dough with a "cinnamon butter" made with the cinnamon, butter and BROWN sugar instead of the white. The cinnamon I used was 2 percent oil, too, so had a nice strong cinnamon presence. Combing the three ingredients was easier. As to the pan cleaning? Use disposable medium-weight foil pans sprayed with Pam. The rolls slip right out when inverted (leave the pan on for a few minutes to allow all the caramel to run over rolls) and the pan gets crumpled up and tossed away! I'm going to make them again for Christmas morning. Great recipe! 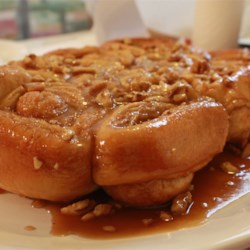