I used skim milk, so I used 1 cup of milk (instead of 1/2 cup) and 1 cup of water (not 1-1/2 cups). This soup surprised the heck out of me because its “skinny” ingredients (and I even used skim milk) tasted a bit decadent and was filling. I used Wondra® flour and whisked it into the water-milk mixture to be sure I had no lumps in the soup. My cubed potatoes were small size, so they were tender in fewer than 20 minutes. The bacon on its own is a subtle layer of flavor, but this is just a good combination of ingredients. This was lunch today, and my hubby enjoyed it as much as I did. We love mushroom soup, I’ve tried a lot of recipes, and this one ranks right up there with the best where I’ve used heavy cream or half-and-half. And thanks, yajuwen, for quantifying every line item for this soup (well-written), so there’s no guessing involved; this one’s a keeper! ••••• UPDATE 4.18.17 ••••• Had no fresh thyme, so I just used dried which worked fine. Whenever I get a craving for decadent cream of mushroom soup, I head to this recipe. It simply never lets me down, and yet, I can enjoy it guilt free! 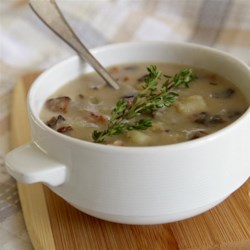