I’ve used this recipe 3 times (ultimately to serve as a Christmas cake.) I increased the peppermint extract to 1.5 teaspoons, omitted the almond extract and used 1 teaspoon of vanilla instead (just due to preference in my household). Otherwise I followed the recipe exactly. Luckily I didn’t have any issues with the cake sinking. The first time, I baked in two 9-inch rounds. The layers came out too flat to present as a double layer cake. (BTW I wonder if the recipe means to say 24 mini cupcakes, as I don’t see how you could get 24 standard cupcakes.) But the flavor and texture were very nice so I decided to try again. The second and third times I doubled everything (including minor adjustments noted above). This amount worked perfectly for three 9-inch rounds. I didn’t use the icing recipe. Instead I used my favorite buttercream to which I added a little peppermint extract for extra minty flavor. As the recipe owner suggested, I sprinkled crushed peppermint candy on top of the cake, and also around the cake serving plate for a festive touch. Thanks for the unique and tasty “Christmas” cake recipe! 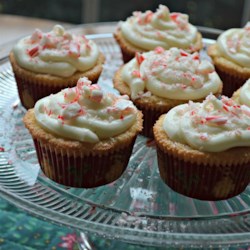