I made a couple changes just for what I had on hand. I had four large turkey drumsticks that I bought on the cheap, so I cooked them down and pieced them out and used the broth (that I flavored up with onion, garlic, cumin, coriander, paprika and oregano) that I made in this soup. I didn't have whole peeled tomatoes but I did have fire-roasted tomatoes, so I used that. I upped the spices quite a bit and threw in two chopped red bell pepper when I sauteed the onion and garlic. It's a great way to use turkey on the cheap, which I really appreciate and this soup as a whole is pretty low-cal, if you lighten up on your cheese sprinkling hand. Plus, it's quick, even making my own broth. After I had the broth made, it literally took me less than a half hour to pull this soup together. But, you might need more spice. I like my soups really kickin', so I just spiced away. After taste testing, I think it needs something else. I can't put my finger on it. Thanks for sharing your recipe, Doug. NOTE: And for all of you who are like me and buy turkey drumsticks for the cheap meat, four large is exactly enough for a pot of this soup! 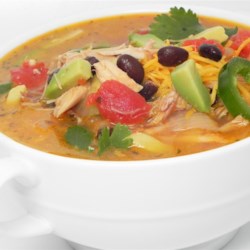