I've been sitting here trying to think how to rate this... It's better than I could ever describe. Five stars doesn't do it justice. I made this for my wife when she came home from work and she raved about it... raved more than she has about anything I've fixed so far. Since there was only the two of us for dinner, I only made half of the recipe and I think either one of us could have gobbled up the entire thing. So next time, I'll make twice as much. I couldn't find frozen pearl oinons so I used fresh ones from the produce dept. I put them in boiling water for three minutes, then cooled them in cold water before attempting to peal them. That made the onions easy to peal. That also cut the extra baking time back down to the 50 minites for the fresh onions. I used Ritz Crackers because that's what I had on hand. After following the recipe exactly, I sprinkeled a light top layer of garlic bread crumbs over the top of the crackers just for the extra seasoning. The finished product was better than I could describe! I think I could fix this every single day and never tire of it. Thank you Sara for the best side dish I've fixed yet! 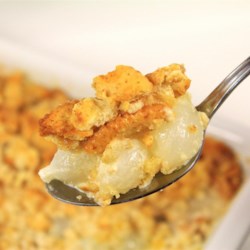