This recipe was disappointing and would be better named "American Enchildadas". To be fair to the submitter, I always follow a recipe exactly the first time I make it, but my family thought these were bland. I usually make chicken or seafood enchiladas with a green or red sauce and I thought the ground beef would be a nice change. The soup, yogurt, and mozzarella sauce was interesting, but there was too much of it and the ground beef filling for only 6 corn tortillas. Also, the taco seasoning didn't seem quite right and perhaps the recipe would have been better if I had used my own seasoning combo instead of the taco seasoning mix and had used monterey jack cheese instead of the mozzarella. I won't make these again. 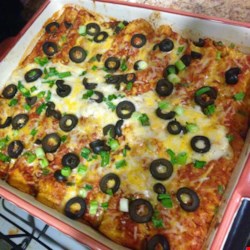