I've made this twice now. The first time was to use up some eggs and leftover salsa, sour cream and peppers. I had already made up a delicious Indian dinner, but got bored & did this in addition. It was a bigger hit than the Indian food. Today, I made this again and doubled the recipe because the 11x13 pan for 4 people disappeared to fast. I did the sour cream and eggs in the blender to aerate which my eater loved how fluffy they were. I added mushrooms, jalepenos and at the very end did sprouts on top after it was out of the oven. I learned doubling the recipe wasn't enough for 6 people. I'll have two make two doubled recipes next time. What a hit!!! 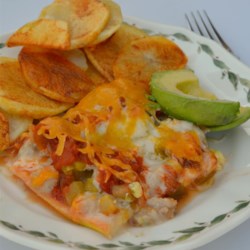