This is a great recipe if you're making farro for the first time. I used a bit more farro (1.25-1.5 cups) and increased the chicken stock (vegetable) to 4 cups. I let the farro cook about 20 minutes longer than suggested, which I think was a fortunate accident. There were no procini mushrooms at my grocery store, so I used a mix of dried wild mushrooms and a package of white button mushrooms that I already had on hand. Next time I would add a bay leaf while cooking, for some extra flavor. I used Greek yogourt in the place of the creme fraiche (about 4 tbsp) and 3-4 tbsp of Parm (which was a bit much, as Parm is pretty salty). It's similar to this recipe, which I keep in my rotation http://allrecipes.com/recipe/barley-mushroom-risotto/detail.aspx 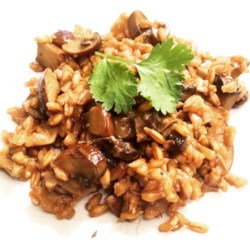