A great, hearty soup for a winter's night. I made this pretty much as written - my changes being using a liter/quart container of organic chicken broth and 2 teaspoons of the Creole Seasoning Blend from this site (I try to avoid processed foods and additives as much as possible). I also used an additive free turkey kolbassa for the smoked sausage. The seasoning was pretty near perfect - a nice little kick from the creole seasoning and salsa and a touch of sweetness from the ketchup. I would recommend caution and don't add salt until the end (tasting first) - it was just about right without any additional salt as many of the ingredients already had salt in them. I also found that I needed another 2 cups of broth - and it was still really thick (but we like that). A definite "make again" and will try some of the variations suggested. 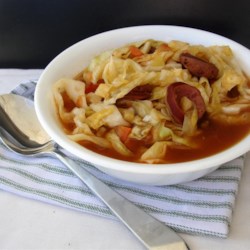