Made this tonight using frozen puff pastry to make it easier and this was delicious. Per the video I used tarragon instead because that's what I had as well as cognac instead of sherry because I had it on hand, both changes mentioned in the video, only other change was adding a little diced shallot when adding the congac. Awesome !!!!!!! A few years ago I made a large bowl of this when I lived in CT a few years ago when lobster was cheaper than hot dogs for the 4th of July and poured it over a pile of pasta, it was incredible. 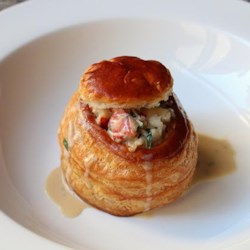