Good and easy! I only had one double pie shell, and most of the reviewers said it wasn’t enough for two pies, so I put it all in one without reducing the recipe. I was worried it would leak out as it was heaped up pretty high, but I put some turkey stuffing inside around the edges in the hopes it would help prevent leaks. Can’t say for sure if it worked, but it turned out leak-free and beautiful. I added an additional 1/2 cup gravy according to reviewers. Also I don’t think it needed as much extra seasoning, maybe half the amount would have been perfect. 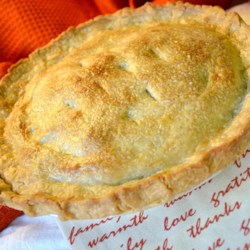