This recipe was very good and really a snap to put together. I did make a number of changes since I was scaling this down to just two servings. I used one large boneless skinless chicken breast, pounded slightly and cut in half. I used more carrot, peppers (red and yellow) and mushrooms than called for and a large clove of garlic. I used one can of diced tomatoes already flavored with oregano, garlic and basil, so I cut the Italian seasoning to 1 teaspoon. I first browned the chicken in a skillet with a little olive oil and placed it in the bottom of the slow cooker. I then deglazed the skillet with the tomatoes and their juice. I combined all the other ingredients (except the pasta) with the tomatoes and poured everything on top of the chicken in the slow cooker. My chicken was done in just four hours. The only problem was the carrots weren’t quite as tender as I’d have liked, so next time I will substitute orange bell peppers and leave the carrots out all together. I did thicken this up a bit with a corn starch/water slurry. Rather than pasta, I served this over rice. I will do this one again. Hubs will be happy, because he loved it. 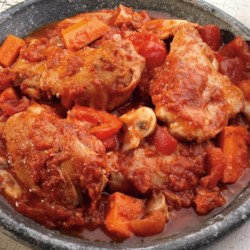