If I had rated this recipe before eating the end result, I would have given it only 3 or 4 stars. Try as I may, there was no way I was going to get 3 kringles out of the amount of dough the recipe makes. I ended up with 2 and then the cuts were a little too long or something because a lot of the filling seeped out during baking. However, I transferred them immediatly upon removal from the oven to a clean surface so they wouldn't get stuck to the pan. The end result tastes absolutely awesome and in the end, was worth the trouble I had. I will make these again, doubling the amount of dough and making sure that my cuts aren't too long so the filling doesn't leak out. Thanks for sharing the recipe. 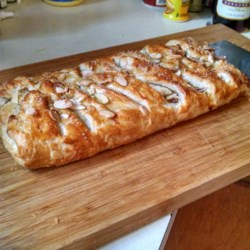