Amazing! My husband said it was even better than at the restaurant. I followed the recipe to a T the first time I made it. I would suggest cooking the sausage & bacon in a separate pan, then getting a new pot to cook your onions & garlic in and continuing with the recipe from there. I get that using all the same pot adds to the flavor but it coated everything in a layer of orangey-brown grease and the soup just smelled like grease to me. Next time around I used a fresh pot for the stock and just added in the cooked meat and it was much better. The red pepper flakes can be a bit overbearing together with the mild sausage so next time I'd probably cut it down a bit on those. All in all it was delicious, thank you! Would make again. 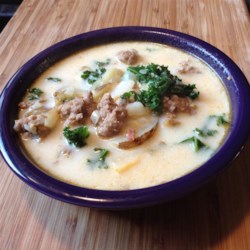