This was the first time I made paella and turned out wonderful! Followed the recipe almost exactly, only used green bell pepper instead of red, and kielbasa sausage for the Spanish chorizo. Also, I had to add a little water after taking it out of the oven (but maybe that was because I ended up with a bit less than the 2 cups of prepared broth it calls for in the beginning). I then covered my pan with its lid and cooked it on low for about 5 minutes, and got those bits of golden caramelized rice Chef John's mentions in the video. This was really easy for a very tasty meal, and also the cleanup was a breeze :) Thank you, Chef John! Update: the second & third times I made this (within a month ;) ), I added 1 lb. shoulder pork in pieces (previously cooked in a separate pan and seasoned with salt & pepper). I also didn't have chicken broth so used water with 1/4 onion, 3 cloves of garlic and 1/2 tsp salt. I also doubled the saffron (used 1 tsp)., added a handful of green beans and used 1 whole cup of peas, it was delicious! 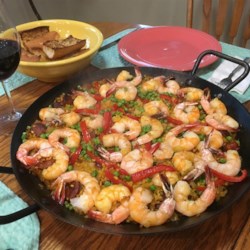