I rate this between 4~5. One, I didnt have celery so I had to leave it out. However, I cant imagine only using a 1/2 a cucumber. I also really don't care for a lot of dressing, so I used 1 medium cucumber and halved the dressing. I used a garden cucumber and peeled and de-seeded it. I cut the onion and cucumber between 1/8~1/4 inch slices, as it really didnt say. I used non fat yogurt, reduced fat sour cream, but regular mayo, which was what I had. Made as written, here, I got 3 servings at approximately 78 calories each. Overall, it was a little more vinegary, or tart, than I like. For the lime juice I used 1 1/2 tsp. when I halved it. I might test a little less white vinegar, though, next time. However, I liked the dill flavor and that the dressing was not real thick. I would still make this again. Note: Second time making, and still halving the dressing, I only did 1 Tblsp of white vinegar instead of 2 and that worked perfect. May even add another half a cucumber due to extra dressing. 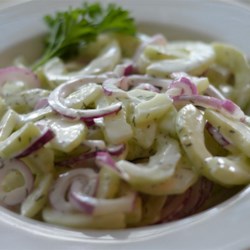