I have tried this twice and it fell apart both times. I have a few complaints about the coconut oil. It completly changes up the flavor of the s'more and coconut oil is 120 calories per tablespoon! I did use the idea of broiling the mallows in the oven. I put the whole graham crackers on tin foil, spread chocolate over the center, cut my mallows in half and placed them on either side of the break line, and broiled. This make a perfect treat! I kept an eye on them too so they wouldn't burn. It took about a minute on low broil until they were perfectly brown on the top and since they are halved, enough of them cooked. mmmm. 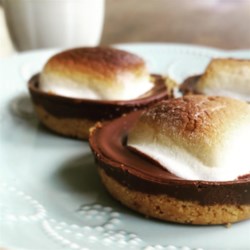