This was a pretty good Sunday night supper! I used 1/2 c. water as the cooking liquid, and cooked for 5 hours on high. After adding the barbecue sauce and the other ingredients, I felt the liquid needed to be reduced, so I let it go without a lid until most of the sauce would stick to the pork. I felt the sauce was a bit sweet, so next time I will omit the honey in the sauce, as my brand of sauce is already sweet. I also wanted to pump up the flavor a bit, and I added 1 tsp. adobo seasoning and 1/2 tsp. smoked paprika to the sauce before I reduced it. I wasn't too sure about the slaw, but I have to say it grew on me. The combined flavors of the slaw and the meat complimented each other, with the tiny bit of heat and tang of the slaw offsetting a little of the sweetness of the barbecue sauce. I have to say that the BEST part of this recipe is using the Reynolds Slow Cooker Liner! I have a 6 qt. pot, and it's very heavy and hard to manage during cleaning. With these liners, it's a minor wipe up, and clean the lid. I do not want to run out of these little cook's helpers. 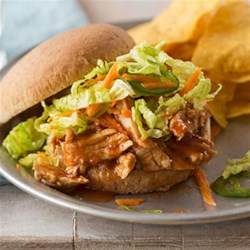