My only real complaint about this soup is the sodium and it is salty. However, it is a fantastic and very quick throw together Asian inspired soup. It's super cheap to make too. I had a small amount of mushrooms left and found this recipe. I ended up doubling it and making 2 servings, because the instant ramen comes in round block form in a cup. The recipe calls for a 1/2 a round. For the lettuce I used the iceburg lettuce pre-chopped in the bags with carrot and purple cabbage. I just sliced it thinner. The extra stuff in the bag just added more color to the soup. For the broth I mixed up some chicken broth using broth paste. I did 1 tsp. of broth paste instead of the suggested 2 for 2 cups of water. I figured it would cut back some of the sodium and to be honest in the instant cups the block is coated in the seasoning. It is not a packet, so I had try to scrape off the broth powder. Make sure to slice the onion really thin, because even doing that it will take 5 minutes to soften. I boiled the soup the whole time. The instant ramen did take only 3 minutes as suggested. I also used low-sodium soy sauce and just beat 1 regular sized egg for the 2 servings. I also realized that even though I doubled the recipe I kept the soy sauce and sesame oil the same. I would consider reducing both personally if making 1 serving, to cut down on sodium. As made, either way, my husband said, "Wow, this is the best darn ramen I have ever eaten!" 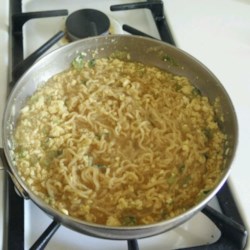