I've made this recipe a couple of times. We just finished eating it and it was absolutely fabulous. This time I halved the recipe since there was only two of us. I had ham instead of bacon on hand, just less milk than called for (just enough to make a nice cheese sauce. Add a little milk, then a little cheese, repeat until cheese is gone). I also sauteed the onions and then added the ham in the pan to flavor up the ham. The adding of dijon mustard as suggested in another review topped everything off perfectly. There was no need for salt or pepper. It reminded us of eggs benedict. Delicious! 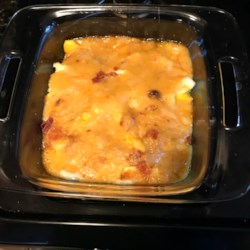