I made a version of this recipe this past weekend for an extended family brunch. I saw many recipes calling for what I considered to be "too much" milk. I had seen another recipe that rather than milk, using sour cream. So I modified this recipe. I used the 24 eggs (actually used a couple extra, just cause I had them), a big "dollop" of sour cream (likely about 1/3 cup), and I whizzed the eggs and sour cream in my blender. Then to that I added shredded cheddar cheese (I used 1.5 lbs - so it was definitely more than 1.5 cups), drained jar of sliced mushrooms, a couple of shakes of hot pepper sauce, and about a lb of diced ham / bacon. I made 2 of these, so in one I used bacon, in the other I used ham. While I was prepping, I just put the 9x13 pans in the oven, each with a half stick of butter to melt, so the egg mixture went into these pans once the butter was melted. Popped the pans with the egg mixture in a 350 oven for about an hour to an hour and 15 minutes. They were fabulous!!! Everyone raved about them and many want my recipe. It's easy as can be and feeds a crowd. My husband was very leery that these wouldn't be that good and wouldn't be enough. He had to eat his words (along with the eggs!) I will make this again when the occasion arises. Even the leftovers are delicious!! 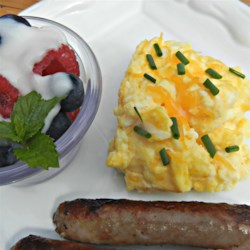