I cut the recipe in half and omitted the cinnamon (I've never had it in eggnog, so I figured it made sense to leave it out of eggnog fudge) and the almonds. I followed the recipe, and even turned down the heat when it started to boil - but allowed it to keep boiling. It still turned out rather hard. Not need-to-use-a-hammer hard, but not the smooth, creamy consistancy that I look for in fudge. As for the taste, it was good. Tasted like eggnog and VERY sweet. 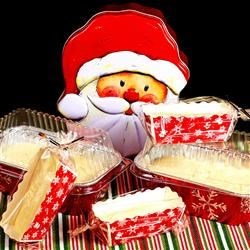