This was interesting (at best), and probably very healthy - but that's about the only reason I can think of for making it again. Honestly, I think my horse might like it more than I did - and I'm a kale fan! Some of the ingredients (e.g. tahini, golden raisins, smoked slivered almonds) are not cheap & are not things that I have frequent use for - so they will probably sit in the cupboard forever. I did end up adding dried cranberries towards the end of the meal, and that was an improvement. I would suggest substituting dried cranberries instead of the golden raisins. I just found it too 'kale heavy' and would be tempted to cut the kale in half & use bok choy or napa cabbage for the balance. 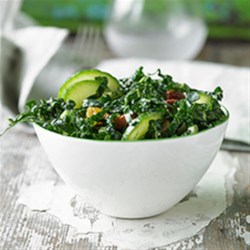