I should probably start off by saying that stroganoff is one of my favorite meals but I'm pretty picky about it. I looked through this website for a while looking for a recipe that looked good and not too complicated. This was the perfect sunday recipe, just layer and let it go for a few hours. I wasn't sure what wine to use so I just used the cabernet sauvignon I had on hand. I did follow the recipe except two small changes. When I was putting salt and pepper on the stew meat I also added a bit of paprika. I also could not find dried chives so I just left them out. I think the way it was written the recipe is great, but it came out delicious my way too. None of the changes were very large. I just have a few things to point out. 1) warm the cream cheese up to room temperature to let it soften and consider breaking it into small chunks. 2) a tablespoon of paprika really adds some nice flavor to red meat dishes. 3) I really like a savory flavor so I might double the Worcestershire sauce the next time I make this. This recipe is definitely a keeper too. Satisfying, and quite simple but also I believe it is a bit healthier than some of the other recipes I have seen. Update: I’ve made this recipe many times now. Everyone I’ve fed it to loves it. I do add the paprika, and double the Worcestershire sauce. I add chives when I have them but that isn’t a deal breaker to me. This is one of my favorite recipes to come home to after a long day. 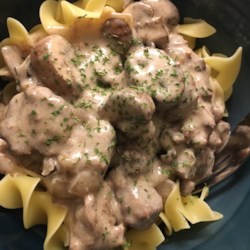