I had high hopes for this soup and was excited about the speed of using my pressure cooker. I made exactly as the recipe stated and both my husband and I thought the soup was overly milky and had too mild of a tomato taste which should be "the star of show". I rated the recipe two stars which is how it tasted as written for my family. I did manage to salvage the soup by making some changes. Luckily I had (2) cans of peeled whole tomatoes in my pantry, so, I drained the tomatoes and pureed in my food processor & added to the soup. It gave the soup more of the tomato taste that was missing and thickened the soup more which we liked. It took quite a bit of salt and pepper to season the soup properly. I did make this soup in January, so, it is possible my tomatoes weren't quite as vibrant in flavor as what you would find in the summer. For my personal taste there were too many changes to make this recipe again. 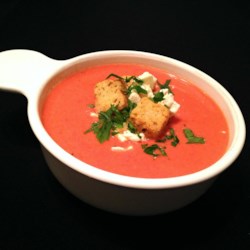