Let me start by saying that this is my first time making a swiss buttercream, but I’m quite familiar with american buttercreams. I used this recipe as well as a few tips from around the internet and I couldn’t be happier. I agree with the previous reviewers that it takes a lot of time, but not a lot of active time. Set your stand mixer and walk away (I wouldn’t have attempted this without AT LEAST an electric mixer) read a book, watch a movie, overall quite relaxing. My egg/sugar mixture came up to temperature in about 5 minutes, rather than 10 that the recipe indicated and was about 160 degrees when I checked it (I also did checked it with my fingers since I doubted my thermometer after only 5 minutes). I followed other instructions and took my butter out of the fridge and cut it up right when I put the sugar/egg mixture on to mix. By the time I was ready to add the butter it was soft enough to stab with a fork, but nowhere near as soft as I would want for a cake batter or cookies, regardless, my meringue didn’t break as I added the butter. I added butter very slowly (didn’t add another cube until the first cube was no longer visible). I wouldn’t want to make this buttercream the same day I’m making a cake, but I like to make my cakes the day before, add a crumb coat, and refrigerate overnight. (I made an american buttercream for the crumb coat since I didn’t feel like making this recipe last night). This buttercream was exactly what I needed for the textured cake the 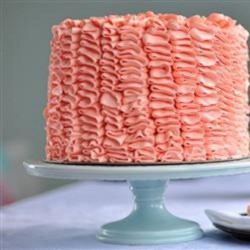