These were pretty good. I actually made 2 batches. The first ones I made exactly as written. They were maybe worthy of a 3 star rating. I probably wouldn't make them again if following the recipe as written. Then I made them following the reviews. I used butter instead of shortning, more milk, more cheese, added parmesean too, and brushed them with garlic salt and melted butter after coming out of the oven. I would make them like this in a heartbeat. 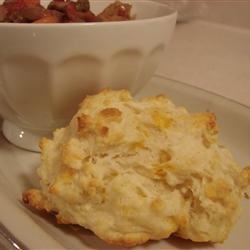