This "Cauliflower Fried Rice" is EXCELLENT (chef worthy)! I had imagined so many adaptations to the recipe before I had actually made it (i.e. marinate the meat; switch up the pork for a combination of pork, chicken, and shrimp; add hot pepper sauce and/or fresh grated ginger) but I don't think there is much room for improvement in this recipe "as written" now that I have made it. If I didn't know that it was made with cauliflower, I would have never guessed (although the reheated "leftovers" did taste like cauliflower, but still delicious). My large "average" cauliflower yielded 40 ounces of shredded cauliflower, so a small cauliflower would have been enough. I deviated from the recipe only slightly: used garden-fresh peas (not frozen) and cooked them with the vegetables (not separately); added a couple stalks of diced celery and a cup of sliced button mushrooms (which were in my fridge needing to be used up); doubled up on the garlic (personal taste); and used gluten-free low-sodium tamari (not regular gluten-containing soy sauce). I also used toasted sesame oil for the classical Chinese flavor (not almost flavorless plain sesame oil). Thank you John Melinte for sharing your recipe. 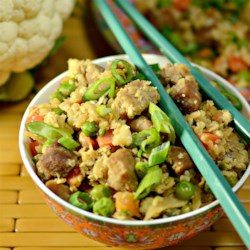