As the first reviewer of this recipe I had an advantage. Except for the cinnamon and vanilla, which submitter lists as optional anyway, this is the same recipe as the wildly popular and 5-star “Fluffy Pancakes,” also from this site, with well over 5,000 reviews. So I already knew these were going to be delicious! I used buttermilk rather than the soured milk (same difference essentially) and, just as I learned and have been doing since I was a little girl, mixed the batter till blended but with some small lumps still remaining. I did not add the optional vanilla or cinnamon. Now here’s Hubs’ eloquent review of the day. “They’re good,” he muttered with a mouthful of pancake and pure maple syrup. How helpful is THAT? With my usual frustration I asked him HOW good. “Delicious good,” he responded. I don’t think it could be stated any better! We haven’t had pancakes in several years and to be reintroduced to them this morning using this recipe was our win. They are indeed fluffy and light, with just the right amount of lift. The recipe is dead on with both the levels of salt and sugar resulting in perfectly enhanced flavor with no baking powder aftertaste. Simply excellent, and just as is, without the additions of cinnamon or vanilla. No doubt that would be good too, but I say if you’re only going to have pancakes once every blue moon, why mess with the perfect, classic rendition. 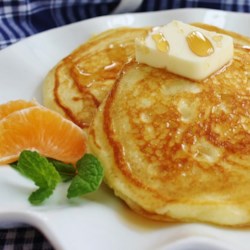