I was so disappointed with this lasagna! I won't be using this recipe again. With such a high rating, I thought it would taste better. I followed the recipe exactly, except that I only used 1/3 of the salt called for. (One serving of the original recipe is almost a full daily allowance of sodium.) It was still too salty. It tasted like something you'd buy in the freezer section at the grocery store. Why waste all that time making it at home if it doesn't taste any better than the manufactured stuff and isn't any healthier? There also seemed to be too much sauce and not enough of the ricotta mixture or mozzarella. Suggestions: 1. Leave out the added salt altogether. There's already enough salt in the sausage, parmesan and canned tomato products to season everything. 2. Drain the meat after browning and before adding anything else. All that saturated fat does nothing to improve the flavor. 3. Use oregano instead of Italian seasoning and leave out the fennel. Italian sausage already has fennel in it. 4. Leave out one of the cans of tomato paste. The condensed tomato flavor was so strong it drowned out the spices. 5. Use a full 16-oz block of mozzarella, and grate it instead of slicing it. You'll get more even coverage. 6. Double the ricotta mixture (ricotta, egg, parsley). 7. (Optional) Replace the 1/2 cup of water with 1/2 cup of red wine, preferably chianti or cabernet sauvignon. 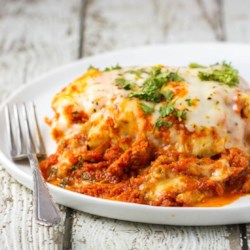