This was tasty. I had to make a few changes because I did not have all the ingredients. I added artichoke hearts as I was short one eggplant and I will probably make that change permanent for future times. I also sliced the eggplant more thinly because I needed to get 10 slices from one eggplant. I feel this helped with folding them in half. I also added chicken to the marinara sauce. I was looking for more of a all in one baked dish. In the future I will decrease the marinara sauce as it was too much for me. I found this took longer to cook and prep than estimated but I find most recipes take longer than stated. This will be one I cook again and again. 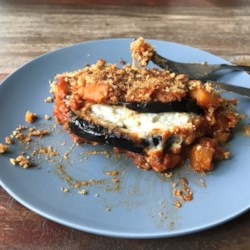