This turned out quite a bit better than expected. My only changes were cutting the black pepper in half and using reduced sodium soup and gravy mix. When I measured the gravy mix I found the smaller packets now are basically the full 3 Tblsp., so no need to measure. I would definitely use a large sheet pan with sides and line it with foil before spraying with cooking spray. I believe at the end it meant to pour all of the gravy over the patties so that is what I did. Mine needed an extra 15-20 minutes of cook time total in the baking process. I didn't precisely measure the additional cooking time, but baked them until a thermometer hit 165 degrees. I gave them a 4 instead of a 5 because I found them a tad too bread crumb heavy. Although, it seems less so the next day. I would like to try the recipe again with 3/4 of a cup of bread crumbs to see the difference, without altering the texture too much. ty 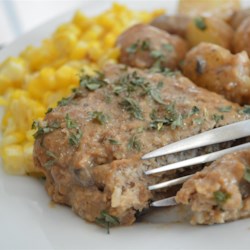