I can buy sfogliatelle ricce from the Italian bakeries where I live, which are made like this recipe. I have to admit that I am not a fan of the baked ricotta filling after having tasted the American version of the sfogliatelle, the lobster tail at Mike's Pastry in Boston. I have searched high and low and cannot find a lobster tail locally, so I resorted to making my own and used this recipe for the dough. The difference between the traditional sfogliatelle ricce and the lobster tail is that the lobster tails are not filled and baked with the ricotta filling, but are instead filled and baked with pate a choux (eclair paste)in order to expand and elongate their shape, which will resemble a lobster's tail. Then, after they cool, they are injected with a creamy filling that is basically diplomat cream (pastry cream mixed with whipped cream). I can vouch for the quality of the dough in this recipe, but I did not use the ricotta filling, so I cannot comment on that. I definitely had to add more water, even more than the recommended 2 teaspoons to get the correct consistency. After forming the shells, I filled them with choux paste and baked at 425 F for 10 minutes and at 375 for 10 more minutes. The choux paste forms a hollow cavity that can be filled with anything you desire. I do recommend the diplomat cream, but would try others in the future, such as sweetened mascarpone and whipped cream with chocolate and cherries; a chocolate diplomat cream; or a hazelnut cream. 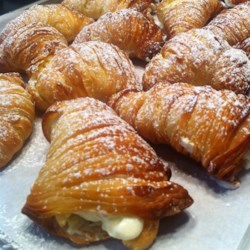