After reading one reviewers opinion that there was not enough fat in these, I added the 1/4 cup of butter listed on the package and lowered the eggnog to one cup. I think the added fat is important. I liked these cupcakes; they had the typical pound cake crust (which is the best part), and the dense, but not heavy texture. There really is only enough batter to make about 21 decent sized cakes. I did not like the frosting: It was tooth-achingly sweet (a pound of sugar plus the sweet eggnog!)and made me feel a bit sick. I noticed that others felt the same way, scraping off the frosting (though the kids didn't seem to mind). I agree with the reviewer who added a lightly sweetened whipped cream topping. I will try them that way if I chose to make these again. (Perhaps the eggnog whipped cream on this site). Without the frosting and with the change in the cupcake recipe these would get four solid stars, and would definitely earn my recommendation to both eggnog and pound cake lovers. 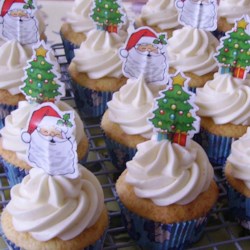