I've made this three times: the first time, I followed the recipe to the letter. It was good, but I thought it was too much whiskey and too much almond flavoring. The second time I cut the whiskey to 1 cup, and the almond flavoring to just under 1/4 tsp. That was much better. The third time, I didn't have any heavy cream, so I just added 1 cup of skim milk, and I think it was the best batch yet. The heavy cream makes it really thick, almost like a milkshake. Skim milk of course thins it, but you get the same amount of creaminess (I think) and less calories. This stuff is best after it's been in the refrigerator overnight--the flavors are fully blended. Great stuff! 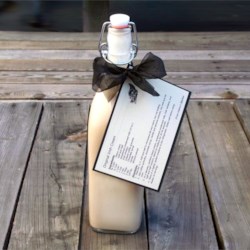