I made this recipe last night as a side to the Chicken Cordon Bleu II recipe on this site. (also an awesome recipe!) I'm not a potato lover in general b/c I think they are too starchy and bland. This recipe was delicious and super flavorful! I followed the recipe exactly with only two changes. I substituted Savory (dried) because I did not have fresh or dried rosemary or thyme on hand. I used it generously. And since I'm not wild about potatoes, I cut the red potatoes into bite-sized pieces, so you get less potato center in proportion to the crusted browned edges. Use a small metal spatula to get under the potatoes without breaking them up instead of a spoon. Oh, I also added yellow peppers to the red ones suggested. It made the dish so pretty! A wonderful recipe that I will definitely make again, especially for company since holding them only enhances the flavor! 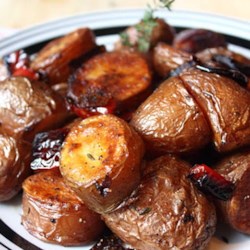 How to Make Roasted Red Potatoes