Rating a five because although I changed it around I NEVER would have thought to put these things together! I used Canola oil instead of butter - 1 tbsp per serving, and used a little more lemon juice. I also use the brown sugar with Splenda and had to use fresh dill because I don't have dried. What I did was make a foil packet for each fillet. I covered the fish with the marinade, sealed the packets and baked at 375 for 35 minutes. Then I unwrapped the packets and let the fish sit in the bubbling marinade for ten more minutes. Hubby won't stop raving! I'd love to grill but don't have the patience for basting! :) 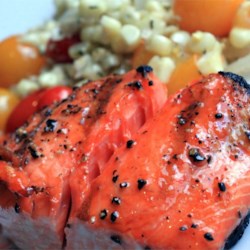