I've made this many times through the years, with different variations depending on who was coming over to eat. Sometimes I have had to add more ingredients for some in a separate bowl. My daughter-in-laws like it with plumped raisons and apple chunks added, the grandkids like it best when I use cool whip instead of sour cream, my brother -in-law likes it with a yogurt instead of sour cream...I personally like it with halved green grapes, banana slices and pecan pieces. One of my sisters uses vanilla pudding (straight out the box) instead of cool whip, yogurt or sour cream. Best when refrigerated at least 24 hours. 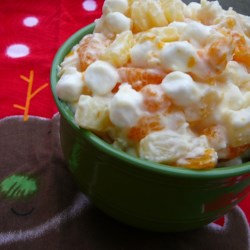