Well, I should have paid attention to the "spiced" part. I made this in August when the peaches were ripe and while my husband liked it, it was just too Christmassy tasting to me. Couldn't really taste the peaches at all (and they were fantastic as I peeled and nibbled). Also, the directions say to boil the pectin, add sugar, then boil again. This is the opposite of what the pectin packets say (boil sugar first then add pectin, then boil again), and processing for 15 minutes was too long even at 5,000 feet, so the result is 11 jars of peach habanero sauce. We will use it, but it isn't jellified. Oh, and one final note ... I had never handled habanero peppers before. I didn't wear gloves to de-seed them and about an hour later I scratched my eye with my fingernail. It took an hour of flushing my eyes with saline and milk before the pain went away. Totally my fault, just be careful. Holy cow that was a painful lesson to learn. I will try the recipe again but next time without as much allspice and I will follow the directions on the pectin packs so that these set and will update. Probably next year. Good luck! 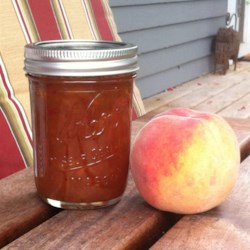