I wasn't sure about the necessity of cornstarch in this spice mix but because other, similar, recipes on the web called for it, and because I marinated the meat (I used strip steak and shrimp) in the seasoning along with a little olive oil and a dribble of water I felt more comfortable. In deference to Hubs' sensitive innards I omitted the cayenne which was no hardship as far as I'm concerned. I just substituted some fresh ground pepper. I used this for the seasoning called for in Spicy Beef Fajitas, also from this site. Having now eaten the dish I used this seasoning for, I have no more doubts about it...and only wish I would not have listened to Hubs and made more than the amount of fajitas he insisted was plenty for us. 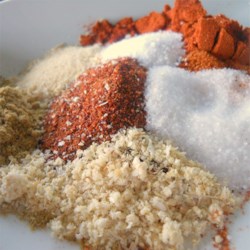