Very good sauce. I followed the ingredient list exactly except did not specifically use Kikkoman branded products. Some were, some weren't. As far as the recipe goes, I did not marinade, bake or grill as directed. Instead I dumped everything in a slow cooker and let it go. This resulted in a very nice Teriyaki rib. The sauce had largely become liquid with the melted fat from the ribs. It was not gooey like you would expect from a rib sauce, but that was just fine, the flavor was there. The meat almost looked as if there was no sauce on it at all. I would like to try this on ribs again using a more traditional procedure to give me that gooey goodness that goes with ribs. I've had a request to use this sauce again on chicken breasts. I think the possibilities are endless. I served with lo mein and fried broccoli. I slow cooked on high for about 3 or 3 1/2 hours and low for another hour. When the meat starts working up the bone, they are ready. 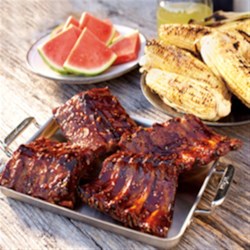