2-22-2016 ~Know what Hubs said with one thumb up, the other holding onto his spoon, and his mouth full of chili? “Best chili I’ve ever had! I want you to make it again, exactly the same way.” This is real kudos to Bob (and to me too since I tinkered with the recipe a little). What caught my eye about this recipe were the additions of bacon and liquid smoke, neither of which I’ve ever used, and both of which took this recipe to the Chili Hall of Fame in our book (and let it be known, I am not a huge fan of chili). Because of Hubs’ sensitive innards I had to cut back some on the chili powder but this chili is so packed with flavor that caused no harm. Just as I had hoped, the bacon and liquid smoke gave it a flavor distinction from other chili with subtle smokiness that made this unusually delicious. Still, while I’m sure it was good stuff as is, in our book my tweaks took this from good to great. Along with the onions, I also added chopped green pepper and celery because we love both it in our chili. I also used half kidney beans and half chili beans. And I have to be honest; I don’t know why water was called for. Water has no flavor! I used my own tomato sauce from my garden instead. So I essentially used half fire-roasted tomatoes, and half tomato sauce, no water. This is an excellent recipe that I’m sure Bob has no problems with anyone tweaking. I’m sure I’ve not heard the end of this from Hubs; and that’s a GOOD thing. 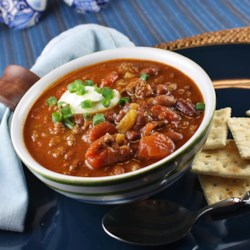