I make this but I do it differently nad Id give mine 5 stars.. for one I cook the crust I don't cool it. I bake it like you would any gram cracker pie crust or it will fall apart when oyu cut it pretty easy and can get soggy. Make it the same as in hte reciepe but cook it for for 10 to 15 minutes of so until it firm but dont let the edges burn! you want a nice golden brown.... then I do not use the lemon juice and dont know why its even in this?, usually you ad it in to keep fruit from browning or to add tartness but its not really needed here at all as the berrys won't brown and there isn't enough to add in tartness. For filling mix as said in above reciepe but ad in the cool whip to the cream cheese! then put in a COOLED crust and put in the fridge for a few hours so its set and firmed up.( you can skip this if your in a hurry, it jsut helps it so its set and the jello won't seep into it or under it) Then mix the hot water with your jello then add in FROZEN raspberries instead of the cold water until it gets thick then pour over the cream cheeze and cool whip mix. its really the same reciepe as the strawberry and if oyu wanted you coudl add more cool whip on top but it really doesnt need it! ALSO this is the same recepe as the strawberry and pretzel salad except I like the gram crust better than the pretzel crust and I like the raspberries better than the strawberries. same reciepe except for the crust and berrys, you can also use regual sugar instead of powdered. 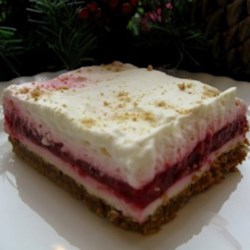