Skip to main content New<> this month
Turkey Meat Loaf: Almost As Good As Mom's Used To Be
Reviews:

Well....what can I say. This had the potential to be good. Probably just my family's tastes are different. But I found it to be VERY heavily seasoned. Not sure if it was due to the stewed tomatoes....or the thyme (I DID put in half the called for thyme...should have cut it even further or left it out)...but everyone found it inedible, except for me...but only because I refuse to waste food. It was highly unpleasant. The texture is good, it smells good. The sauce on top seems fine. Just the seasonings are off. I DID make two modifications.... 1/2 the thyme (as mentioned) and instead of 3lbs turkey, I used 2lbs turkey and 1lb 93% beef...neither modification would have made the seasonings this overwhelming. 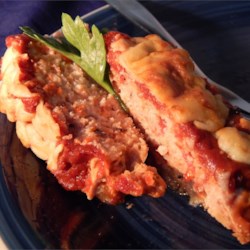 Turkey Meat Loaf: Almost As Good As Mom's Used To Be