I decided to make this because i was running out of things in the fridge... It came out AMAZING... but i winged it and substituted some things... WHAT I DID: COOKED @ 375 instead of 350 (based off of previous comments) and placed oiled/seasoned hash browns in oven after it was preheated and cooked them ALONE while i cooked the beef and did all the other steps... (about 20-25 mins, depending on how fast you work). While cooking beef i substituted onion powder for actual onions, cut into TINY little pieces (yellow onion) and also added salt and a tad bit of WORCHESTIRE sauce... I also substituted the gravy mix with ACTUAL gravy, because i didnt have the dry stuff.. so just used some beef broth (1 cup), flour, WORCHESTIRE (just a tad, like 1-2 tsp) and butter was my mixture i poured into beef after draining. after that just made it as usual, except I also put a couple tidbits of butter on top of mixture to melt into it and i cooked 20 MINUTES @ 375 then another 5 mins to melt remaining cheese... MMMMMM DELICIOUSSS... MAKE IT YOUR OWN :) 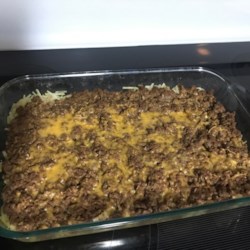