My family mostly liked this. My husband and I really liked the flavor (see my additions below). The kids (11 and 9), who don't like tuna casserole in general, didn't complain. Reviews were mixed when I asked what they thought. One said it was good. The other said she didn't really like it. But, like I said, they don't usually like tuna casserole, so this is a pretty decent review from them. I altered the recipe by mixing the dill into the noodle mixture instead of into the topping. I also mixed in 1/2tsp onion powder, 1/4tsp garlic salt, 1/4 tsp pepper, 1/16tsp cayenne pepper. I thought the taste was really yummy. The breadcrumb topping didn't turn out as I would have liked. It was not crusty at the end of cooking. It was just oily. I sprinkled on more breadcrumbs and put it under the broiler for a few minutes. In the future I would probably use about 1/2 the butter in the topping. The cheddar cheese undoubtedly played a part in the oiliness, too. After eating it, I wonder how essential the cheese was. I think you might be able to reduce or remove the cheese with little impact to the taste. Alternatively, it might be good to mix the cheese in with the general mixture. In spite of the negative things I've noted, I would make it again. I'd likely tweak it as suggested, though. 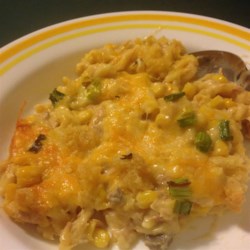