I love it when I'm the first reviewer of a recipe and it's a winner - and such is the case here! I wasn't sure I was going to like the lemon mixed with the cinnamon but I'm so glad I gave it a try. This is a cute, soft, buttery little Snickerdoodle of a cookie with just a hint of fresh lemon. No, actually this is more cinnamony than a Snickerdoodle because there's cinnamon in the dough here. I also generally don't like soft cookies but THIS soft cookie is gooood. My only criticism, and it's a small one that in no way affects the cookie, is that there was probably twice as much of the cinnamon-sugar mixture than I needed. I'll consider it that I'm ahead of the game, because now I have a batch of cinnamon-sugar all mixed up and ready to go for the next time I make these or maybe to sprinkle on muffins! 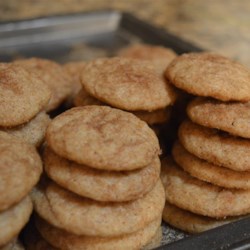