This was quite good, I followed the recipe exactly except I substituted plain greek yogurt for the sour cream. It's called pudding cake so I expected it would have some degree of gooeyness...Mine was like cake around the outside edges and runny/gooey in the middle. I can see how cooking it longer or decreasing the water may be a good idea for some people as mine was more pudding than cake - but still very tasty! It would've been amazing if I'd had any ice cream to go with it! 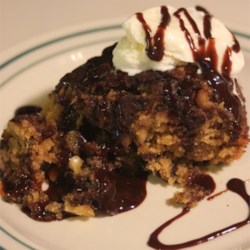